Key terms and concepts to help you understand what “undetectable” means.
By Emily Land, MA

The term “undetectable viral load” pops up everywhere from lab reports and medical journals to social media, dating apps and global awareness campaigns. Here are some key terms and concepts to help you understand what “undetectable” means.

HIV. HIV is the virus that causes AIDS. HIV hijacks cells in your immune system (your body’s defense system) and uses them to replicate (make more copies of itself), destroying those cells in the process. 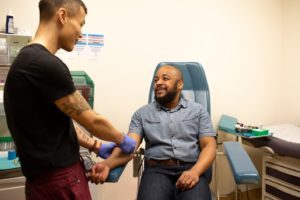 Antiretroviral therapy (ART). ART involves taking HIV medications to keep HIV from replicating, or making copies of itself. ART reduces the amount of virus (or viral load) in a person’s blood and other body fluids. The goal of ART is to reduce the presence of virus in your body to undetectable levels.

PrEP. Short for “pre-exposure prophylaxis,” PrEP is an HIV-prevention strategy in which HIV-negative people take an oral pill once a day to reduce the possibility of HIV infection.

Undetectable = Untransmittable. People who are undetectable do not transmit HIV to other people through sex. That is the meaning of “undetectable = untransmittable” or “U=U”, a message started by Prevention Access Campaign about what it means to be undetectable. If you have been taking HIV medications for at least six months, have a consistently suppressed viral load (less than 200 copies/mL), and continue taking your HIV medications as directed, you will not transmit HIV to others.

Treatment as Prevention (TasP). Treatment as prevention refers to taking HIV medications to prevent the sexual transmission of HIV. As with U=U, people living with HIV who maintain undetectable viral loads do not transmit HIV to other people.

Treatment as prevention is just one strategy for preventing new HIV infections. Other essential tools for HIV prevention include condoms and lube, syringes for people who inject drugs or hormones, PrEP for people who are HIV-negative, regular HIV testing, self-education about HIV and sexual health and open communication with sex partners.