Skip to content
Services are currently available in-person and online. Masks are required at all of our locations and other safety protocols are in place. Click here to learn more.
Advocacy

An overview of the state of HIV and hepatitis C in San Francisco, California and the U.S., updated annually.

Of the total number of San Franciscans living with HIV/AIDS at the end of 2019, 9,044 were living with HIV ever classified as AIDS. AIDS is a late-stage HIV disease defined by a low count of CD4 cells or an opportunistic infection (“HIV Epidemiology Annual Report” 2).

Of those newly diagnosed with HIV in 2019, 83% identified as male and 62% were men who have sex with men. White people represent the highest number and proportion (35%) of people diagnosed with HIV, followed by people who are Latinx (33%) and African American (17%). Diagnoses among African Americans and Latinx people decreased slightly between 2018 and 2019 (“HIV Epidemiology Annual Report” 4).

Compared to persons who were not homeless and diagnosed with HIV in 2010 to 2019, persons who experienced homelessness at time of HIV diagnosis were more likely to be women or trans women, Black/ African American, trans women who have sex with men (TWSM), and PWID (including non-MSM, MSM, and TWSM) (“HIV Epidemiology Annual Report” 71).

Black men and women had the highest HIV diagnosis rates by race, with rates per 100,000 population of 79 and 22, respectively, followed by Latinx men and women (“HIV Epidemiology Annual Report” xi).

95% of people newly diagnosed with HIV in 2019 entered care within one month of their diagnosis (“HIV Epidemiology Annual Report” 15).

More than seven in 10 (71%) people diagnosed with HIV in 2018 were engaged in ongoing HIV care for three to nine months after their first medical visit (“HIV Epidemiology Annual Report” 15).

The proportions of persons with HIV who received care and were virally suppressed in 2018 were higher in San Francisco than in California and the U.S. (“HIV Epidemiology Annual Report” 22).

By race/ethnicity, time from diagnosis to viral suppression decreased steadily between 2015 and 2018 among whites and Asians/Pacificc Islanders; Black had the highest median time to viral suppression in 2017 (103 days) and it has decreased by more than half in 2018 (47 days) to a level similar to that for whites (52 days) and Latinx (43 days)” (“HIV Epidemiology Annual Report” 15). 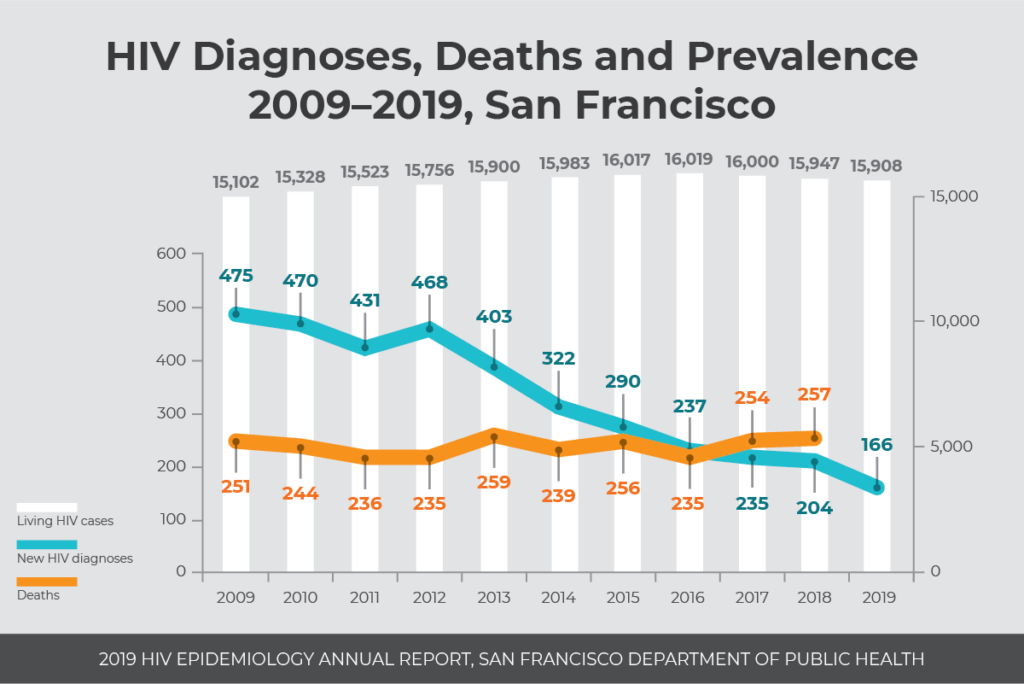 People were diagnosed with HIV in 2019

of people diagnosed with HIV were younger than 30

of newly diagnosed people become virally suppressed in a year

Hispanic/Latinx people in California made up the greatest proportion of new diagnoses (47.9%), followed by people who are white (25%), Black/African American people (18%) and Asian people (5.8%) (“California HIV Surveillance Report” 6).

In the United States

In the United States, approximately 1.2 million people are living with HIV today. About 14 percent of them (1 in 7) don’t know it and need testing (“CDC Statistics Overview”).

Hepatitis causes inflammation of the liver and can lead to cirrhosis (scarring), liver cancer, liver failure and death. The most common types are hepatitis A, hepatitis B and hepatitis C. The hepatitis C virus (HCV) infects and can severely damage the liver. It is the most common chronic blood borne disease in the United States; approximately 4-6 million persons are infected (“About Hepatitis C”).

The End Hep C SF initiative estimates that approximately 12,000 people in San Francisco are living with active HCV infection, despite the existence of an easy-to-complete, highly effective cure. Additionally, San Francisco has the highest liver cancer rate in the nation, most of which is attributed to high rates of hepatitis B and hepatitis C virus infections (“About Hep C SF”).

People living with HIV are at higher risk for contracting HCV, and approximately 8% of PLWH are co-infected with HCV. People who inject drugs are the vast majority of those diagnosed with HCV infection, and are least likely to access treatment. Men who have sex with men (MSM) and baby boomers are also disproportionately affected by HCV. While trans women make up a small percentage of the total population of San Francisco overall (0.1%), End Hep C SF estimates that more than 1 out of every 6 trans women is currently living with HCV (“About Hep C SF”).