This year’s campaign highlights “justice for people who use drugs” and demands that San Francisco declare a state of emergency to open safe consumption sites.
By San Francisco AIDS Foundation

SAN FRANCISCO, August 11, 2021– This year for International Overdose Awareness Day (August 31), and for the entire month of August, San Francisco AIDS Foundation launched Overdose Awareness and Prevention Month campaign to sound the alarm on the overdose crisis, share life-saving resources, and demand that legislators do their part to implement evidence-based solutions such as safe consumption sites.

“Every day that we wait means more deaths and every death is a failure of political leadership. Overdose is a crisis in San Francisco and our leaders have to step up and respond with boldness and compassion to save lives NOW,” said activist Ande Stone.

This past April, efforts to address the overdose crisis were delayed in the state legislature when hearings for Senate Bill 57 were postponed to January 2022. SB 57 (authored by Senator Scott Wiener, D-San Francisco) would have allowed San Francisco, Oakland, and L.A. to pilot safe consumption sites in order to combat the rising rate of deaths by overdose.

In response to the delay of SB 57, San Francisco AIDS Foundation’s bold Overdose Awareness and Prevention Month campaign demands justice for people who use drugs and shares life-saving resources. The comic book-style imagery of the campaign directly acknowledges the “superheroes” who carry Narcan to save lives, and who find ways to use substances more safely. It also honors the comic and zine culture that is integral in harm reduction communities for disseminating life-saving education and resources for safer substance use.

“We are trying to say a lot with this campaign—remembering those we lost to overdose, educating the community on how to take care of each other, all while motivating the citizens of San Francisco to push their elected officials to make a change,” said Christopher Artalejo-Price, SFAF’s creative campaign manager. “It’s my hope that we can do all of that. I hope that this campaign changes the conversation. If any city in the U.S. can be a place that changes how we think and treat people who use drugs, it’s my hope that San Francisco is that city.”

The campaign consists of community events advocating for safe consumption sites and resources, including: 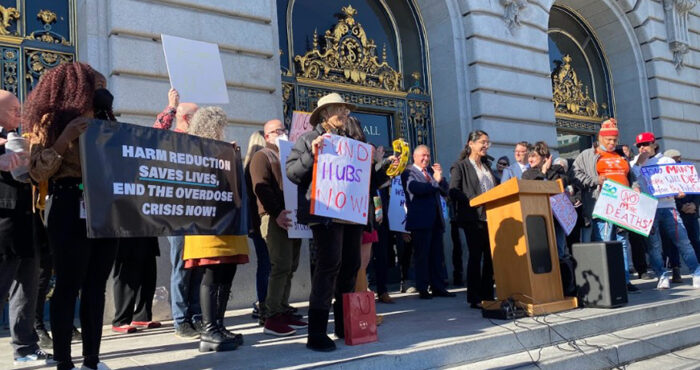