In a sample of more than 2,500 transgender clients receiving care from a large managed health care system, only 16% with an indication for PrEP were linked to PrEP care.
By Emily Land, MA

In a sample of more than 2,500 transgender clients receiving care from a large managed health care system, only 16% with an indication for PrEP were linked to PrEP care. 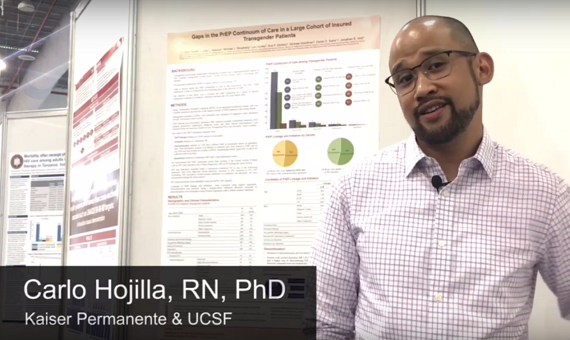 The reason it’s important to look at PrEP uptake in trans populations is because it’s a group that, honestly, we’ve ignored as researchers and health care providers. It’s a group that’s vulnerable to HIV infection for a host of different reasons. If you’re looking at trans women, specifically, trans women are almost 50 times more likely to become HIV infected. If you’re thinking about transmasculine folks or trans men, we don’t really have that much data. But Asa Radix had a really great talk earlier at the plenary that gave an estimate of HIV incidence in transmasculine folks somewhere between 0 and 10%.

The Strong Study was a validated cohort of transmasculine and transfeminine members of Kaiser Permanente. These are folks that had membership prior to 2015 and for this particular study, we looked at folks who had active membership within Kaiser during the PrEP era, which was 2012 to March 2019.

We were surprised that the majority, a good number of folks, who started PrEP were transmasculine. These are folks that we have traditionally not really thought of as being at risk of HIV. When in fact, they might be. Or they are interested in seeking these services. And actually, the seroconversions we saw during the study period, a few of them were transmasculine folks. Based on chart review, we found that folks report not only vaginal sex but also anal sex and other things we would traditionally consider higher risk factors for HIV. Our data begs the question, what are we doing for transmasculine folks? How are we reaching that population? And are we really assessing risk factors appropriately for that population?