My life with anorexia as a trans man

We need to broaden our understanding of how eating disorders affect the LGBTQ community—beyond the concerns of gay men.
By Ryan Sallans

When people think or talk about eating disorders in the LGBTQ community, many people focus on the experience of gay men. The body-conscious world inhabited by gay men—of shirtless bartenders with chiseled abs and the “no fats, no femmes” requisites on Grindr—is likely contributing to the higher rates of body dissatisfaction and disordered eating seen among gay men.

It’s an important conversation, absolutely. But we also need to broaden our understanding of how eating disorders affect the rest of the LGBTQ community. My story, as a trans man, is part of that.

For any person who has either been diagnosed with an eating disorder or who has disordered eating tendencies, the act of starving yourself or purging your stomach after consuming thousands of calories in one sitting is not a conscious act—at first. You may not know it’s something that can be diagnosed or categorized as an “eating disorder” until your behaviors have become habit and deeply entrenched.

At 19, a sophomore in college, I was newly diagnosed with anorexia nervosa. I was incredibly thin—with stick-like arms and a non-existent waist. I wasn’t happy with the way I looked, but I did find comfort in the fact that the way I ate (or didn’t eat) brought me a more masculine figure. I didn’t have hips or breasts. I stopped menstruating, so I didn’t have a traumatic monthly reminder that I could carry a child.

At the time, I didn’t connect my eating disorder to the fact that I am trans. I had growing feelings of attraction to women, but didn’t consider myself to be a lesbian. At the same time, I hated my female body, a body that betrayed my core feelings of being male. My rejection of my female shape and size perplexed and scared me. 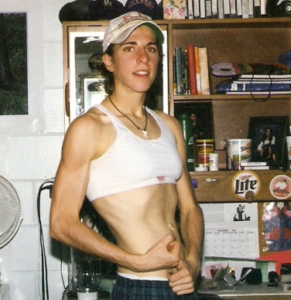 Anorexia, in the beginning, made me feel like I was more closely connecting to my identity as an athlete. With power and dedication, I had complete control.

Later on, I no longer felt like an athlete. I no longer wanted to look at myself and smile at what I had accomplished. I had no sexual libido, no attraction to anyone of any gender. I didn’t feel strong—I felt weak and at the mercy of the voices in my head that were driving me to unexplained compulsions.

Twenty years later, I sit here reflecting on my decision in 1998 to go on a diet. Then, I was a naïve, female-bodied, assumed heterosexual kid from the Heartland. Now I’m a middle-aged national speaker and author, bearded dude with a wife. I’ve traveled around the nation talking to people about what it means to be trans, what eating disorders look like, and how our body image is influenced not only by what is physically around us—but what is going on inside our heads and how we’re treated by others.

And although eating disorders can be painful and traumatic in and of themselves, even more scary is that eating disorders are so closely tied to serious mental health issues. The Trevor Project study found that disordered eating was closely linked to suicide ideation: 96% of those who had been diagnosed with bulimia had considered suicide, and 92% of those who had been diagnosed with anorexia nervosa had considered suicide. So if you know a young person (or really a person of any age) who is living with an eating disorder—that’s likely not the only thing they’re going through.

You are deserving, and recovery is possible.

What can be scary is finding either a therapist or resources that are supportive of LGBTQ identities. I recommend reaching out to the National Eating Disorders Association (NEDA). Their website has resources in different states that may be beneficial for you. For transgender and non-binary individuals, it may also be helpful to reach out to Trans Folx Fighting Eating Disorders (T-FFED).

Simply say, “I’m here for you. I love you. I’m willing to take you to a therapist if you would like to go.”

The hardest part is making that first call. It’s difficult to take that first step into a room where you have no choice but to explore what it is that hurts you the most, what it is about yourself that you feel you need to reject. This can be scary, but it can also be life-transforming.

During my talks about my own eating disorder, I always say, “While my eating disorder nearly killed me, it actually saved my life. It forced me to talk about feelings.”

By exploring my feelings and my life, I was able to pull out the words and labels that helped me understand first my attraction toward women and then my transgender identity. Reaching out for help and knowing that no matter what attacks I receive about who I am, it doesn’t matter. This is my life to live, and I choose to do it as a loving human being. To do this, I must continue to strive to love myself.

The opinions expressed in this article are those of the author alone. They do not reflect the opinions or positions of BETA or of San Francisco AIDS Foundation. 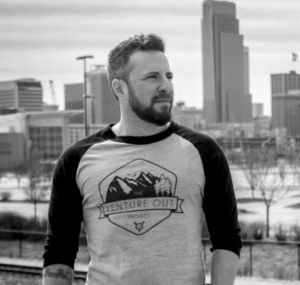 Ryan Sallans is a renowned transgender speaker and author. Since 2005, Sallans has been inspiring people around the world through storytelling that interlaces research and data focused on creating inclusive environments for LGBTQ individuals, employees and patients. Sallans’ memoir Second Son: Transitioning Toward My Destiny, Love and Life< is one of a few books detailing the life and transition of a transgender man. He is currently finishing his second book which explores his life post-transition and his recovery from anorexia nervosa. Learn more by visiting his website: ryansallans.com. Find him on your favorite social media platform under “ryansallans”.