Skip to content
Services are currently available in-person and online. Masks are required at all of our locations and other safety protocols are in place. Click here to learn more.
Our voices

When HIV/AIDS first emerged in the early 1980s, some bold pioneers stepped up to fight the mysterious and deadly disease. Cleve Jones and Dr. Marcus Conant are two of those men.
By San Francisco AIDS Foundation

2011 marks the 30th year of AIDS. “The View from Here” is a special year-long series to mark the anniversary. Advocates, doctors, researchers, politicians, philanthropists, educators, public health professionals, journalists and celebrities are answering the same set of questions each month.

This month we feature Cleve Jones and Dr. Marcus Conant, co-founders of what is now San Francisco AIDS Foundation. When the disease first emerged in San Francisco in the early 1980s these two men realized something needed to be done, quickly. They mobilized to provide information to the community and, in the process, they sparked a movement. They are heroes and pioneers. Their spirit and passion live on today in the services of the foundation.

We’ve learned a lot in 30 years. What do we have yet to learn?

Jones: We still haven’t learned how to pressure governments enough to make treatment available to everybody. I think we still have a lot to learn about how to apply political power to get proper public health policies.

Conant: We have to learn that with a problem like AIDS we need to fight it as a society, not as individuals. No epidemic has ever been conquered only by doctors treating patients. No epidemic has ever been conquered only by patients banding together. It is only when you have public health working in the interest of individuals that you can stop an epidemic. So what was true in the beginning is true in the end—we have never had a federal program run by epidemiologists and scientists to coordinate an AIDS program. We didn’t have it in the early 80s and we don’t have it today.

What was your deciding moment, when HIV/AIDS became an important issue in your life?

Conant: For me it was when I saw my first patient, which was in the summer of 1981. It was a nurse at UC Hospital who had Kaposi’s sarcoma.

Jones: My deciding moment was a dinner with Dr. Conant at the Zuni Café in San Francisco. Marcus had taken me up to UCSF and introduced me to a patient there who would die a few days later. We went out to dinner and he looked at me and he said, “I think it’s a new virus. I think it can hide in the body for years, and I think it’s actually transmitted, and I think it’s fatal.” There was something about the way he said it, and that was the moment when I knew this was going to be a calamity.

Immediately after that dinner we got to work. He wanted to partner with an activist, and we knew we had to set up a foundation. We had to mobilize people and put out some kind of warning, even though we really had almost no information to give to people. We created the Kaposi’s Sarcoma Research & Education Foundation in 1982, which is today San Francisco AIDS Foundation. An eerie thing happened when we started the foundation at 520 Castro Street. The guy from the phone company came to install the phone line. And as he was walking down the stairs to leave, the phone began to ring before we had even publicized the number. That phone never stopped ringing. Some 30 years later, it’s still ringing.

With ever-increasing public health issues to contend with, why should anyone still prioritize HIV/AIDS?

Jones: HIV/AIDS must be prioritized because it continues to threaten the lives of millions of people, particularly people who are already living on the margins. It is a disease increasingly of poverty. Even though treatment is becoming more available, HIV/AIDS is still one of the greatest threats to the health of people all over the planet. It’s the worst pandemic in history.

Conant: It was denied by the Christian right from the beginning, who said this was God’s punishment against gays. It’s not. It’s a virus, and it is spreading exactly like a virus normally spreads. It’s difficult for people to understand this, but it’s a heterosexual epidemic in Africa. 60% of the cases in sub-Saharan Africa are women, and 40% of the cases are men.

What keeps you up at night?

Conant: I’m worried that our government is so dysfunctional that we will never attack this or any other major health care problem in America. Remember, we rely on the U.S. Centers for Disease Control to control disease in America. But both political parties are equally guilty of interfering with the CDC’s efforts to provide proper health care. As a consequence, what keeps me up at night is that we have a dysfunctional health care system that is controlled by politics and not by what is best for the public.

Jones: We now understand that treatment equals prevention. Yet, there are these enormous barriers still in place that prevent people from getting treatment. That is what I find the most frustrating—the knowledge that if we can create conditions that will encourage people to get tested, to learn their status, and then eliminate the barriers to treatment like poverty and cost, then I believe we really could end it. I mean end it, not just manage it or mitigate it, but end it. Every month that goes by with people not being treated, we know that more and more are being infected. We have to eliminate those barriers and make treatment available to every single person on this planet who, like me, is living with HIV.

Three decades into the epidemic, what gives you hope?

Jones: I believe in people. I know the good that people are capable of. I’ve seen what we can do. Those of us who lived through that first horrible decade when there was very little hope at all—we saw what our community was capable of. We saw what our city was capable of. We saw incredible courage and compassion. Everyone I knew was engaged in that struggle. Everyone. We were activists, we were volunteers, or we were staying home taking care of someone we loved. That’s what a community looks like. That’s what a movement looks like, which was all captured so perfectly in the documentary “We Were Here.” So that’s my source of hope, whatever the challenge is: I know what people are capable of. But it’s also sometimes a source of frustration when people aren’t aware of the power they have, or they’re not willing to use it.

Share your messages with Cleve Jones and Dr. Marcus Conant. What do you remember about the early days of the epidemic? What’s your vision for the future? What gives you hope today?

Shaun Haines has been a member of Black Brothers Esteem (BBE) for six years through his work... 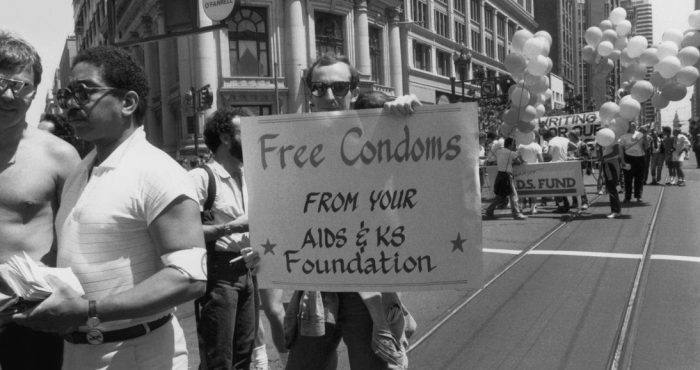 On the 40th anniversary of the first documented cases of AIDS, Cleve Jones reflects on what this somber anniversary means.