Even with PrEP, HIV stigma & discrimination is still a thing

Contributor David Duran shares his experience with dating, stigma and importance of getting everyone on the same page about the effectiveness of PrEP, the power of treatment as prevention, and the realities of modern-day
By David Duran

I remember feeling confused and angry the first few times I was blocked or rejected by an online prospect who said they were on PrEP.

I was confused, because—in every case—there was interest right up until I disclosed my HIV status. I started feeling angry when I realized and confirmed that it was because of my HIV status that the guys I was chatting with were no longer interested.

I ended up asking one of the guys I was chatting with what had caused him to lose interest, and it wasn’t without some probing that he told me the truth: He wasn’t interested in positive men. When I continued to question him, he blocked me on the app.

PrEP is touted as bridging the serostatus divide. It’s heralded as one solution to HIV stigma and discrimination. HIV-negative people have a nearly 100% effective way (under their own control) to remain HIV-negative. When combined with treatment as prevention—when people living with HIV take HIV medications and remain virally suppressed—the risk of HIV transmission is in all likelihood zero. So why the fear? Why the rejection? Why the discrimination?

HIV stigma is alive and well, my friends.

I probably don’t have to tell those of you on Grindr or any other dating and hookup app this. You’ve probably experienced it firsthand.

Just because someone says they’re on PrEP doesn’t mean that they are interested in having sex (or a relationship) with someone living with HIV. Stigma still exists, and unfortunately will continue to exist until everyone is on the same page about the effectiveness of PrEP, the power of treatment as prevention, and the realities of modern-day HIV therapies.

For me, bouncing back after experiencing the sting of HIV stigma didn’t take too long.

When I first began texting back and forth with the guy who is now my boyfriend, it began as a typical online conversation (we met on Instagram). We invested hours typing away questions and answers to each other—starting the process of getting to know one another. Since we hadn’t met on a traditional dating/hookup app, he knew much less about who I am and what I was looking for in a relationship right away.

I really liked him, and knew at some point I would have to send that disclosure text. Instead of a casual short line or two, I ended up writing a paragraph linking to an article I had written about disclosing my status. It seemed like overkill, and I spent a good five minutes reading over what I had written to make sure my words were just right. I even gave him an easy out, if he wanted one.

Before I could send the message, I received a lengthy one from him right back. As I read his text, I realized he was disclosing his HIV status to me, and giving me an easy out, if I wanted one.

The relief I felt in the moment was momentous. I experienced something I hadn’t felt in a long time when messaging guys. Suddenly, I felt everything would be OK. I could pursue this guy and not have to worry about further discussion about HIV, risk, being undetectable.

We spent the next hour reliving our disclosure experiences with guys online, and talking about how stressful and hurtful they could be. It takes a lot of courage and resilience to disclose your HIV status. Even when the response you get isn’t negative, it leaves you feeling vulnerable and questioning how the person you’ve disclosed to will treat you.

It’s been a while since I’ve dated someone else who is living with HIV. Honestly, now that I am, it makes me wonder why I haven’t made it a priority or a preference before. Partly I think it was because I wanted to believe that the world was moving past HIV status as a way to categorize people, but maybe we’re not quite there yet.

What can we do?

I’m not suggesting that people who are HIV-positive should only date other HIV-positive people—that would be ridiculous.

I do hope that we can continue to raise awareness about HIV, what it means to be undetectable, and how to disclose your HIV status. Do you have people in your life who don’t know that people living with HIV who are undetectable do not transmit HIV to other people? You should tell them about Undetectable=Untransmittable. Do you know people who are confused about how effective PrEP is? You should point them to resources that clearly state how well PrEP works if you take it as prescribed.

In addition to doing our part, apps should (and are) doing their part to create better experiences for their users. Some apps are already working to combat HIV stigma by working with researchers, public health experts, and community members to share information about HIV treatment and PrEP, provide HIV testing reminders, inviting users to communicate openly about HIV status and PrEP, and more. 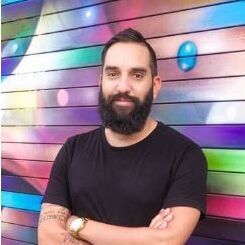