Are Poppers a Risk to My Sobriety?

Poppers are the third most commonly-used drug by gay men. They are oftentimes used to enhance sex, and are taken with other drugs, like meth (one study found that 90% of popper users reported taking other substances). If a person is interested in changing their substance use, and reducing or stopping drug use altogether, is it necessary to stop using poppers too?

To introduce this topic, I’ll start by giving two examples of people (names have been changed) who have made different choices for themselves about using poppers. Read both of their stories, and consider which approach resonates with you.

Carl is a gay man who stopped taking methamphetamine and other drugs 12 years ago. He has struggled for his recovery but made significant changes in his life—until he reintroduced poppers. Always acknowledging they were a “slippery slope,” Carl used them sparingly at first during sex but soon found that they reawakened a head-space of intoxication. He decided they were simply not worth the risk of a full-blown relapse, and stopped using poppers altogether.

Tim, another gay man, stopped using alcohol and cocaine five years ago. He always enjoyed poppers to enhance his sexual experiences. During his first year of recovery, he abstained from them altogether. At his first anniversary, Tim negotiated with his sponsor to occasionally use them during sex. Tim believes recovery is not “black and white” and that some people, including himself, can safely use poppers without relapsing on their other drugs of choice.

What are poppers, and are they dangerous?

“Poppers” is a name given to alkyl nitrites, which are mood-altering chemicals originally developed for cardiac patients. They involuntarily relax smooth muscles (such as those in the throat, vagina and anus) when inhaled and create a “head-rush” that can enhance sexual pleasure. They have long been a fixture in the gay community and, in the 1980s and 1990s, consisted mostly of alkyl nitrites. Today, poppers have been reformulated with isopropyl nitrite, the latter of which has been documented to cause (albeit rarely) eye damage, particularly retinal problems.

Poppers are not benign. Blood pressure can drop because they dilate vessels, causing dizziness, weakness, and even passing out. These effects are compounded with the concurrent use of blood pressure medication. It is important to note that erectile dysfunction drugs such as Viagra can also cause a drop in blood pressure, so using poppers with ED drugs carries great risk.

How do poppers fit into recovery?

Recovery from substance use typically includes total abstinence from drugs. Yet for many in recovery, poppers fall into a gray area. Some practice “don’t ask, don’t tell,” some start their day count of sobriety over after one hit of poppers, and others use them privately without disclosure.

Although some men in recovery may be able to use poppers without great risk, as a gay man in recovery, this is not my personal choice. While any mood-altering substance carries risk, I believe the greatest harm may lie not in their actual use, but in how we handle the topic itself.

Secrets, bargaining, shame, and rationalization—which can be experienced with the use of any drug, even poppers—are fatal for someone working on their substance use.

To bring this conversation into the light, I reached out to people in several closed recovery groups on social media, and asked them to weigh in through an anonymous online survey. Here’s what people had to say about using poppers if you’re in recovery.

How dangerous are poppers for people in recovery?

I received 99 responses to the survey, and the results were surprising.

When asked “how dangerous do you think poppers are for someone in recovery?”

Length of sobriety appeared to have no correlation with assumptions about the dangerousness of poppers.

How acceptable are poppers?

I asked “Do you believe it is ever acceptable for someone in recovery to use poppers?” A surprising 42% of respondents said “yes.”

How common is it to use poppers when in recovery?

When asked, “Based on your observation, how common is it for someone in recovery to use poppers?”

I also asked people to comment on the issue of people using poppers in recovery, and a few general themes emerged. Here they are, listed in no particular order (these themes do not necessarily reflect my own opinion).

There isn’t a one-size-fits-all approach

Some respondents stated that sobriety from mood-altering chemicals should not be so rigidly-defined, and that the use of poppers is not necessarily problematic for everyone.

Still others stated they privately negotiate the use of poppers with their sponsor or simply use them without disclosure.

Others referenced the distinct mood-altering effects of poppers and insisted that true sobriety must include abstinence from them.

Poppers elicit the phenomenon of craving

Many men noted that poppers elicit triggers and cravings because they cause a physical and psychological reaction that is both mood-altering and reminiscent of prior use of all kinds of drugs. This risk is especially high if, in the past, poppers were utilized with methamphetamine.

Poppers also lower inhibitions such that someone who had no intention of using other drugs might find their resistance diminished. We know that sex and drugs in gay culture can be highly ritualized and that simply signing onto social media apps like Grindr or Scruff can be triggering. It makes sense that using poppers, reminiscent of that prior ritual, could elicit cravings for other drugs.

They’re not as harmful as other drugs

Many men in the survey said they believed that poppers are not as harmful as other drugs (they are not without potential harm, as noted above). Survey respondents compared poppers to caffeine, nicotine, energy drinks—even steroids. Some men also stated that recovery is not about removing every harmful substance from one’s life.

Although poppers may be less lethal than some other drugs they are mood-altering. Some men reported that they control potential harm by limiting their use to certain settings or by restricting frequency.

Risk depends on your motivation for use

Some men in the survey noted that the motivation or intention was the key to potential harm. One man, for example, stated he used them “to make sex physically more comfortable, not for a mental rush.”

Others noted that simply using poppers to enhance sex carried low risk, as opposed to using with the intention to self-medicate. Some declared that poppers, unlike other drugs, had never made their life unmanageable while others avoided using them altogether, stating that the goal of recovery is freedom from dependence on substances through the development of inner resources.

The final theme that emerged was the potential for poppers to reawaken and reinforce the drug-sex connection. Intoxicating sensations can be a powerful reminder of old thoughts, feelings, and desires, especially for stimulant users, and there is a real risk of triggering addictive behaviors. One major challenge in recovery is the creation of healthy and satisfying sex and intimacy. This takes time, patience, and a considerable amount of self-examination, a process that for some may be impeded by their continued use of poppers.

Grov, C. and colleagues. Exploring racial and ethnic differences in recreational drug use among gay and bisexual men in New York City and Los Angeles. Journal of Drug Education, 2006.

Plankey, M.W. and colleagues. The relationship between methamphetamine and popper use and risk of HIV seroconversion in the multicenter AIDS cohort study. JAIDS, 2007.

Santo, G. and colleages. Interventions for Non-Injection Substance Use Among US Men Who Have Sex with Men: What is Needed. AIDS Behav., 2011.

David Fawcett, PhD, LCSW is a social worker, sex therapist, and clinical hypnotherapist with a psychotherapy practice in Ft. Lauderdale specializing in gay men’s health. His clinical specialties include treatment for trauma as well as HIV/AIDS and co-occurring substance use and/or mental health concerns. He is the author of “Lust, Men and Meth: A Gay Man’s Guide to Sex and Recovery,” which was named Best Nonfiction in 2016 by POZ Magazine. With over thirty years of clinical experience, Dr. Fawcett brings a deep understanding to the complex interaction of sex and recreational drugs in the gay community.

David Fawcett, PhD, LCSW is a social worker, sex therapist, and clinical hypnotherapist with a psychotherapy practice in Ft. Lauderdale specializing in gay men’s health. His clinical specialties include treatment for trauma as well as HIV/AIDS and co-occurring substance use and/or mental health concerns. He is the author of “Lust, Men and Meth: A Gay Man’s Guide to Sex and Recovery,” which was named Best Nonfiction in 2016 by POZ Magazine. With over thirty years of clinical experience, Dr. Fawcett brings a deep understanding to the complex interaction of sex and recreational drugs in the gay community. 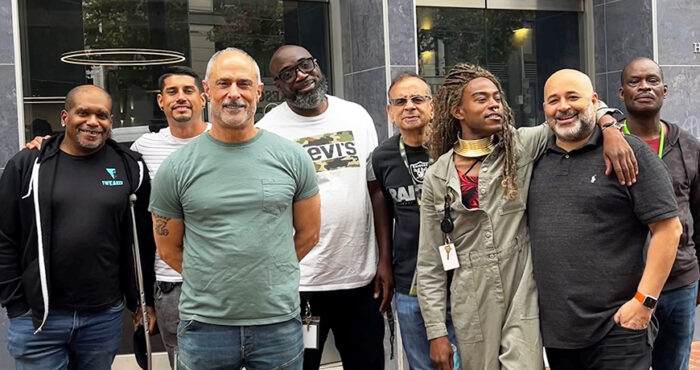